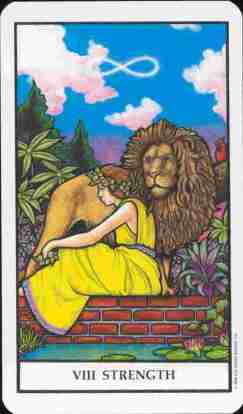 Ten years ago this summer, I attended an event called Women & Power at the Omega Institute in New York. I was open about not being female-identified, but figured that the feminist focus of the weekend retreat would apply to a non-binary person as well. I remember being extremely turned off by the leader of the event, who spoke about femininity in this really essentialist way–about how as women, we had to reclaim a different kind of power that reflects feminine traits and values, because we’re all a sisterhood, bound by menstruation and reproductive cycles and yada yada. But as much as I was turned off by her delivery, ten years later I’m coming back to the core message about a different way of exercising power and leadership and thinking that I really wish we did talk more about that–just maybe not with such a focus on human gender.

Recently, my exploration of tarot, astrology, and similar topics has led me to better understand the idea of the “sacred masculine” and “sacred feminine.” I was always turned off by this kind of thing in the past, how much gender comes up in certain spiritual traditions. I don’t relate strongly to either masculinity or femininity, and I just didn’t understand why we had to think about these two things and this binary so much to be able to access magic or insight. But recently I had a lightbulb moment where I really fully got that these concepts have nothing to do with human gender, and are more about duality than a binary. I still don’t like thinking of them as masculine and feminine at all, because those words in my head are so strongly associated with the ideas of male and female gender. But I’m starting to embrace the idea of duality, of different archetypes or sides of a coin. In the tarot, I love the contrast between the driving, visible power of the Chariot and the more subtle but equally impressive power of Strength.

When I strip the gendered language out, I’m better able to think about how I access those archetypes in my own life, and specifically around power and leadership. I’ve resisted the idea of intuition before, I think in part because of its association with femininity, and am only through tarot starting to realize that I’m actually a highly intuitive person. It’s a tool in my toolkit that I definitely shouldn’t ignore.

At work, I’ve been transitioning over the past couple of years into a management role, and I was surprised to find out how much I love it. I was initially afraid of a role requiring competencies like “influencing others,” because I hate politics, arguing, and egos. I kept picturing conference calls and meetings with a bunch of people butting heads, advocating for their position. But lo and behold, I’ve found that I’m actually great at influencing others–just in a totally different way.

Like the Strength card, it turns out sometimes influence isn’t about brute force, coming into a meeting with an idea of what you’re going to convince someone to do and figuring out how to make them do it. As a manager and a leader, I’m constantly accessing traits that I never associated with influencing others before, such as deep listening. It turns out being the friend that everyone comes to for advice actually kind of applies here.

I’m really grateful to a former leader in my organization who modeled a lot of this side of the duality through her own leadership and helped me to think of myself as a leader. A fellow introvert, she’s all about 1-on-1 conversations and asking a million questions rather than jumping in with a preconceived notion of how she’s going to solve someone’s problem. Her introverted leadership style isn’t the norm in our organization, but it definitely resonates strongly with me. While I haven’t felt comfortable since that event 10 years ago accessing “women in leadership” resources, I feel that role models like her are desperately needed in the workplace. It’s not about “femininity,” necessarily, but it is about a side of this “Chariot/Strength card” duality that isn’t emphasized in leadership development. Some of us are more effective leaders through accessing the quiet power of the Strength card, the woman taming the lion through empathy and a willingness to see deeply rather than through brute force.

I think it’s hard to detach this quiet power from an association with femininity because those associations are so readily available in our culture. Even if this duality doesn’t naturally correspond to male and female, because we’ve coded certain traits as male and female for so long, it’s easy to describe them that way. And it is a manifestation of sexism in the workplace that quiet power or introverted leadership aren’t emphasized–because those traits are associated with women, they are less valued. But the impact of that value system doesn’t only affect women, and the answer isn’t necessarily a tightening of the sisterhood–it’s something we need to address through a rethinking of leadership development overall. What potential leaders do we overlook when we only visibly value the “Chariot” kind of power?

Now that I’m able to recognize these leadership qualities in myself, without being turned off by thinking of them as “feminine,” I have a lot of confidence in myself as a leader and a manager. I focus on building trust through 1-on-1 interactions and gaining influence as folks get to know that I’m going to ask them meaningful questions about their work and exercise empathy in finding tech solutions that work well for all the stakeholders. I’ve been on phone calls where by the end of the call, an executive stakeholder who started out disagreeing with me is literally championing my position and explaining to me why it’s the best way forward as if she came up with it. That’s the kind of influence I feel proud to be able to exercise, but it’s been a tough road getting to where I can access it. If only we could emphasize the dual nature of power and the possibilities of this side of it in standard leadership trainings–without addressing only women and speaking as if this underappreciated influence style were in some way tied to uteruses and menstruation!