← Rethinking Poverty and Whiteness
What Is Romantic Attraction? →

Amerikan History Is White Imperialism: Pass It On 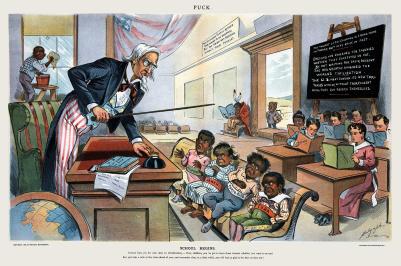 Over the past couple of weeks, I read a couple of critical autobiographies–those of Malcolm X and Assata Shakur. Reading them together, I was struck by a lot of things, but perhaps especially how enduring false narratives of this country are and how those narratives are perpetuated by white people. We hear this time and again from folks of color, how white people are often surprised by actions of the state or the actions of their fellow white folks, rather than recognizing these as enduring historical patterns that folks of color are plenty used to. Why are we so surprised? Why does our ignorance persist so doggedly?

Well, racism, obviously. But part of that racism is the way we reproduce stories amongst ourselves, as white folks. This probably starts before we arrive in school, but it is heavily reinforced by curricula, both formal and informal. School isn’t just about the whitewashed lessons we learn about literature and history, but it’s also a civic education in how to be a Good White American. School teaches us that America is a democracy, that voting is a civic duty, that the cops are the good guys, that prisons are necessary, that participation is important. We learn all these insidious little lessons and then we learn not to listen when black folks and other folks of color are shouting the opposite from the rooftops. School teaches us to turn a blind eye at best, to argue loudly against the truth at worst.

So what can we do about it? Yep, it’s that simple piece of advice yet again. Talk to other white folks. But a layer I’d add is not to assume that the white folks you know, your fellow liberals etc., are as aware as you think they are about race and particularly about the lie Amerika represents. I’ve often found in conversation that folks are surprised by the degree of deception they’ve been living under, once the historical facts are presented. A lot of white folks think of themselves as anti-racist, but read very few books by people of color. So drop some of those facts into the conversation. Recommend relevant books by authors of color to your friends. Challenge civic participation. Keep on grinding on those little bits of resistance and education within your white circles, so that we can make some space as folks of color are doing the revolutionary work.

← Rethinking Poverty and Whiteness
What Is Romantic Attraction? →