What’s So Bad About Phases? 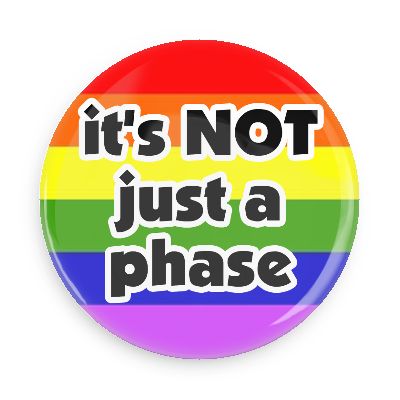 In activisty Pinterest-land, I keep seeing memes about how queer identity is “not just a phase.” I get that impulse, and I do think there are places for the argument–when people assume that queerness is a phase, especially in the condescending way adults often do with young queer women, it’s just obnoxious. But also, I’d like to question why we’re so negative about phases in the queer community. In other words–what if an identity is a phase?

I think it can be really scary to claim one identity and then change your mind. Particularly if the change is towards an identity perceived as “less queer” (which, for the record, is not a thing) you might get written off and excluded from communities that meant a lot to you. Lesbians can be pretty cruel when one of their own decides she’s bisexual or pansexual, and trans folks aren’t always the nicest to someone who decides that transition isn’t for them, or who first comes out as a trans man or woman and then realizes non-binary is more correct. I used to be terrified that this might happen to me, but then I started thinking, so what if it does?

Fun fact: people change. And our access to rights, or community services, or recognition, shouldn’t require that we have a bone-deep permanent understanding of our sexuality or gender identity. You can identify as something for right now. You can try something out and see how it feels. You can even be pretty sure about an identity for ten years and then watch as it shifts and surprises the hell out of you. Some of my favorite things have phases–project management, the moon, human lifespans. So while it’s not “just a phase,” it might be a phase, and that’s okay too!

Posted on March 9, 2017, in queer and tagged identity, not just a phase, queer, queer community. Bookmark the permalink. Leave a comment.