Why Won’t the Media Listen to Non-Binary People’s Actual Words? 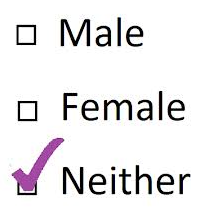 This is another post that is so five years ago, but it’s about a bit of media coverage that’s still annoying me in 2017. Specifically, it’s about the mainstream media coverage of model Andreja Pejic back before she came out as a woman and was being intentionally vague about her gender in interviews. Throughout that year or two of heavy coverage, the media was completely obsessed with its own invented idea of Andreja as terribly androgynous and the fun of a tired old “surprise, it’s a man!” storyline, while completely ignoring what was revolutionary about Pejic: the fact that she openly talked about a non-binary identity in interviews and asked mainstream readers to question their understanding of gender.

While journalists asked superficial questions about clothing (okay, she is a model, but still), they rarely could accept her own statements about gender–that she didn’t much care how people defined her, that she left her gender “up to artistic interpretation.” I think this is a symptom of our cultural obsession with gender expression over identity. We don’t care so much about the truth of an individual’s identity, but rather about whether what we see matches what we expect.

Journalists found shock appeal in Pejic’s presentation, but there was actually not much androgynous in the way she dressed–it was all pretty high femme, or glam at the very least. The shock only made sense if you thought of her as a man in women’s clothes–the androgyny came from that misidentification rather than actual mixed-gender apparel. So the media pasted androgyny onto her by deciding that she was male and labeling her clothing as female. In a way, I think Pejic’s non-binary identification at the time gave the media permission (in their eyes) to play up the transmisogynistic “she’s a man, baby!” rhetoric because they didn’t see as much problem with calling a person without specific gender identity “male-bodied” as they might with a woman.

I also noticed that journalists at the time frequently claimed that Pejic refused to say “what” she was, gender-wise, but I don’t think that was entirely true. What I heard in her interview responses, anyway, was a description of gender that was perfectly legible to me–it just didn’t make sense through a cissexist lens. She didn’t so much dodge the questions as answer them honestly, but complex identities don’t sell magazines. While I found those interviews incredibly affirming, the journalists awkwardly interrupted or ignored her best quotes with predictable “but when you get married, will you wear a tux or a dress?” questions.

Personally, I’m waiting hungrily for another celebrity to talk openly and in full complexity about non-binary identity, and at the same time, I’m hoping that those journalists can at least make more of an effort to accept Andreja now that she’s living an identity they (think they) understand.