This post is part two of a four-part series on poly in practice. Read part one. 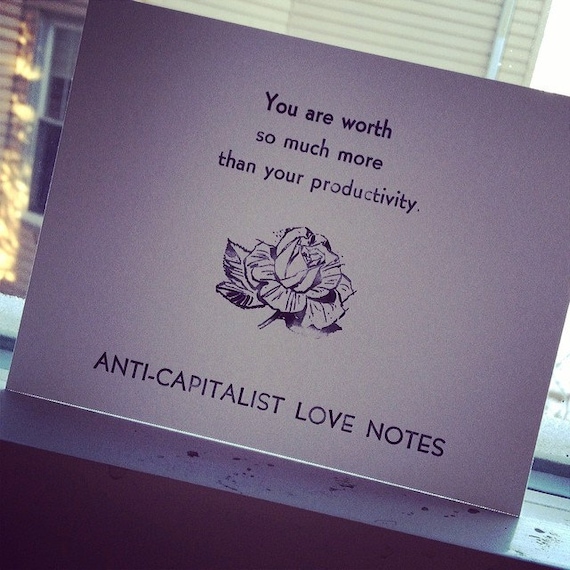 In the first post in this series, I talked a bit about how some societal norms around the relationship escalator have pushed me into an inadequate framework for looking at relationships, particularly in the practice of polyamory. In this post, I’d like to dig more into those societal norms, and particularly into how we can practice polyamory in a healthy way while healing from the wounds a capitalist society constantly and pervasively inflicts on us. I’ll note by way of introduction that I have some privileges particularly relevant here: I’m white, college-educated, and benefit financially from the capitalist economic system in the United States. While I’m ideologically opposed to capitalism, it’s important to note that I also materially benefit from it (and often allow my 9-to-5 work to get in the way of active resistance). I imagine that many of these points apply even more starkly to working class people and people of color.

So to start, I think it’s no surprise that a capitalist, data-driven culture can affect our romantic relationships. I talked in the last post about the dangers of a framework of equality in relationships, and I think it’s this culture that creates the myth that equality is possible. The bootstrap mentality encourages us not only in work but in our relationships to focus on competition, rather than on community: when we allow this poisoned economic model of relating to gain a foothold in our lives, our romantic relationships become tainted by a feeling of scarcity.

I frequently hear poly folks talking about their struggles with a fear of scarcity, whether the scarce resource is time, energy, or even love. We often forget to talk directly about that fear, though, and are afraid to ask for what we actually need from our partners or our metamours in this perceived scarce environment where naming a need means acknowledging that a scarce resource may not be available to us. Instead, we expect that our needs will be met and feel hurt if they are not. This is no surprise, given how most of us spend most of our time at work in environments with limited resources and no salary transparency. We become accustomed to a culture of hoping that if we do our best (in work or in love) we will get what we need without any direct negotiation.

While I think a lot of poly people are better at communicating than a lot of people in unexamined monogamous lifestyles, we are certainly not exempt from silent expectations to follow the relationship escalator as if it were a pre-defined script for our romantic lives. Non-monogamy alone does not require a radical paradigm shift—many of us (whether consciously or not) still have trouble shaking off the feeling that if we don’t “achieve” certain milestones, we are failures in our relationships or didn’t try hard enough, no matter how many relationships are involved.

I’ve learned that despite resisting capitalist culture in my everyday life, I’ve strongly internalized values of competition and goal-orientation. It thus takes a lot of intentional work to unlearn these ideals and apply different values to relationships. I’d like to suggest one alternative model, but I’d also love to hear your ideas for other forms of resistance in the comments.

The alternative model I find most appealing revolves around cultivating communities of care among my immediate “people,” wherein asking for support is a positive thing rather than a sign of weakness. Unlike capitalism, this communities of care model values collaboration and even dependence on other people in some situations. It avoids the ableist assumption that we’re all supposed to be able to do and achieve everything on our own (more on that in post four of this series).

It’s important to be aware of how dominant culture affects us, and it’s okay to say it out loud. This model encourages everyone in the community/ies to ask for things even when it feels like a burden, so that groups of people can seek creative, collaborative solutions to situations where needs aren’t being met. These solutions might involve two partners collaborating, but also might involve multiple people involved in a romantic relationship, or metamours or other parts of a poly network. This is not a model based on pyramids or direct competition, even if the structure of a particular relationship happens to be a “V.” While we all know that time and energy tend to be limited, having all the information might lead to a solution sometimes, or at least a compromise where everyone’s gains are maximized. This is contrary to a capitalist theory of profit maximization where everything is about competition and information is used to benefit the “best” market players—the best situation is where both the whole community and each individual is as happy as possible with an outcome.

In a way, my approach here is anarchistic. I don’t believe that there is any one right way to do poly, and I would distrust any authority that says there is. When we focus on meeting unique needs through collaboration rather than individual struggle, there is no one set of rules that produces the best solution.

This approach also requires a certain degree of emotional vulnerability. Challenging the mentality of scarce resources means that I have to confront my fear of wanting something that is “too much” from my partners or from anyone else in my communities. But it also takes me out of the depression spiral of focusing on what I don’t have or haven’t had in the past. Using this approach requires clear communication of my needs and wants that make those needs and wants less abstract, less of a big scary “too much.”

I’m realizing that what I need isn’t so much to achieve a nebulous goal or to be the “best” or even “as good as” other people in my partners’ lives. Those straw men serve as proxies for what I really want—perhaps something as simple as a desire to be taken care of, a desire to be very important to someone or multiple someones. A fear of scarcity is at the heart of these knee-jerk capitalist responses—what if I need care that isn’t available?

If I focus on these actual desires and fears, then I can shift the focus to how I can get my need for care met within my existing community and relationships, and I can become more aware of the awesome ways in which that need is already met. [Often open and still bleeding] capitalist wounds encourage me to think in the negative, about all the ways in which I might not be taken care of, catastrophizing and focusing on independence or self-protection. Those wounds absorb the idea proposed by so many givers of relationship advice that romantic relationships are all about building yourself up first, and being strong as an individual before putting yourself in community or in partnerships. The darker side of that advice is that it plants a suggestion that I am “broken” if I don’t feel like a complete, self-actualized whole separate from the relationships I am in—ignoring the fact that relationships and mutual support are often an important part of self-actualization that can’t be divorced from the self.

The communities of care model, in contrast, allows me to listen when a partner actually offers care, to think about where I can ask for care both in my romantic relationships and outside of them, and to be open and self-reflective in figuring out what kinds of care I need. It also reminds me that others in my community may be experiencing the same wounds, and that there may be opportunities to cultivate a culture of abundance where I can offer care and support to the people I love—especially when I free up the time spent worrying about meeting my own needs. A culture of abundance encourages us not to fear, but rather to invite, mutual support as an important part of mental/emotional health. Mutual support in relationships and communities isn’t a transaction with a running tally of debits and credits, but rather a way of being and interacting that is too complex to calculate with the language of capitalist markets.